Back in March I came across this article and meant to comment on it sooner, but as we all know ‘life’ gets in the way of some things.  My small allotted time for writing on this site has been purged back and back that for the past 7 months I haven’t been able to really sit down here and write anything.  Yet, I have been saving some thoughts on this article and better late than never is what they always say, right?

DeWolf makes some really good points and kind of covers all of the bases in terms of expat Cantonese learning in Hong Kong.  He himself being an expat in Hong Kong with few Cantonese skills to ‘speak’ of, makes good mention to the moral responsibility to learn Cantonese.

The moral responsibility is something that I find at times to be at the forefront of spending some of your precious time to take some classes and learn Cantonese.  In America, there are a lot of people who bark a big game of foreigners living there ‘must’ learn to speak English or as some have put it unknowingly accurately, they should learn to speak ‘American’.  I think that the same sentiment is there for Cantonese in Hong Kong.  I often question how is it that someone can live here in Hong Kong and not be able to speak to people or to understand what is going on around them?

I am fully aware that English is one of Hong Kong’s official languages and that there is a great base of English in everyone here in Hong Kong but when living in a culture that is so rich and so dependant upon language to access that richness, how could you not learn Cantonese?

DeWolf mentions the difficulty of the language as a barrier to a degree for learning Cantonese.  This point is a very valid one and is important to make when thinking about a lot of people wanting to learn versus those that actually stick with it and learn Cantonese to a certain level of proficiency.   When searching the Internet to see what is the most difficult language to learn in the whole wide world, guess which language pops up as being just about the most difficult to learn?  That’s right Cantonese.

Since Cantonese is so well known for it being difficult to learn, it is understandable as to why so many people give up or don’t even try to learn it.  When the city itself is so accepting of English and money is never lost by a customers’ lack of Cantonese, it is easy to see why so many expats in Hong Kong could really care less about the local language.

A statement made in the article that I 500% do not agree with is the quote from Kevin Chan of Chinese University. He said, “If you look like a foreigner, it’s not easy to practice what you’ve learned”.  From my experience and from what I have written in my previous posts about learning Cantonese.  It is EXTREMELY EASY to practice what you’ve learned from your lessons.  You just have to have thick skin and stick to your guns when on the street.  Stay in character!

The Cedric Sam wisdom in the article is very much true in the opinion of the King of Mongkok.  Life in Hong Kong becomes so much more full once you are able to rap with the people around you.  Once getting to a level of fluency and possessing good proficiency in Cantonese, your entire world opens up.  People that you only knew in English may have a completely different demeanour in Cantonese.  Discounts start to come your way around town because locals give you a bit more respect at times when they see that you have given their culture respect by learning their language.  And everyone wants to help you speak better.  Even if they do laugh at you a bit, it’s okay.

Overall, I think that it is a good article to read through and see where is it that you fall in the equation for the quest of Cantonese tongue flipping.  I sometimes think about how I would be getting by in Hong Kong, had I not spent so much time and energy learning Cantonese. I also think about how people are getting around not speaking Cantonese?

Hong Kong just becomes a beautiful flower opening up to you once you learn Cantonese.  A Bauhinia flower that is. 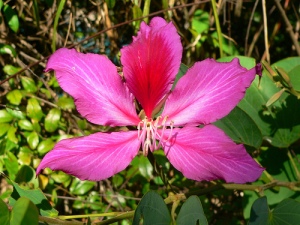 2 thoughts on “Cantonese is a must”