We all love singing.  Whether we’re good or bad singers, in public or in private, we all love to belt out our favorite songs or rap our favorite 8 bars.  In Hong Kong you have lots of options to get your sing on and you can choose to be very public about it or very private.  Sky’s the limit when it comes to going out for some Karaoke.

The King of Mongkok has been in Mongkok for 18 years now and has noticed that here in Hong Kong the Karaoke scene has changed a lot over the past 10 years from when I first got here.  It used to be a lot more popular among 20somethings to hit up the Karaoke spot and you would often hear around the water cooler that co-workers are going out or went out to sing it up after work.

Now you don’t really hear too much about big Karaoke nights and when asking if anyone is going out to sing Karaoke, the response isn’t a given anymore.  Those 20somethings are now 30somethings and their way of spending a night out has changed.  Even the now 20somethings aren’t really that interested in singing Karaoke like their predecessors.

There could be a few reasons for this.  One reason could be that Hong Kongers are always following trends and the trend for many years before was of anything Japanese.  So many Japanese pop cultures made their way to Hong Kong and Hong Kong people ate it up.  Now the trend is Korean pop culture and while Koreans do like some Karaoke, the trend of having Korean BBQ has taken front seat and that trend is starting to move it’s way out the door now too.

Another reason I think is that music tastes have changed so much in Hong Kong, that there are so many people that just don’t listen to all of the Canto-pop songs that are mainstays on the Karaoke computers.  K-pop has made its way here and also a lot more Hip Hop, R&B and other sounds are a lot more popular than they were before.  When I first stepped foot on the sacred ground of Mongkok, in shopping centres all you heard was Canto-pop blaring on the system at all of the shops and what not.  Now you hear lots of Hip Hop and K-pop songs with a sprinkle of Canto-pop or Mando-pop songs.  It’s actually quite refreshing as the variety is a nice growth for Hong Kongers.

But…….. The Karaoke scene is far from dead and they still do some good business and there are lots of types of Karaoke that you can find all across the city.  So let’s grab a mic and get into it.

Neway Karaoke is the staple brand of the proper Karaoke private rooms that Hong Kongers love to get into and sing with their friends.  You can get a room small enough for 2-3 people or a room big enough to accommodate 30-40 people.  The selection is quite wide in terms of songs with mega computers able to hold tons of music with accompanying videos.

A big change that they have made is that now Neway tries to have something for everyone.  Not everyone wants to really sing that much and anyone who has been to Karaoke party night knows that there is always someone who wants to sing every damn song all night long.  So, they have started to put other things in the rooms like small pool tables, dart boards, Playstations, etc.  Neway also has buffet meal plans so that people can feast like the Kings and Queens of the mic that they are.  Tons of different booze plans to get your drink on and all the paraphernalia one would need to play all the drinking games that are popular among HKers.

Nothing shady about Neway and there is no age limit so you may see 13 year olds singing their hearts out in the room next to yours or it may be pensioners singing their beloved jams from the 60’s.

Now here is where things change a bit or actually a lot.  A lot of bars around Hong Kong but more so on Kowloon side have Karaoke.  Usually most spots have at least one room that you can get for a private party but for the most part you will be singing in the main area with everyone there to view.  Now you don’t have to stand up or anything, so you can just sit with your friends and sing out that favorite Andy Lau song and a waitress will collect the mic to give to the next person on the list that chose a song.

Some bars have a small stage that you can get on and do your thang.  Now rarely do people really look at the stage and see who is singing unless there is something that has caught their attention to make them look.  So if you’re just an average singer and you’re not doing your choreographed dance performance that you’ve been working on at home in front of your cat, then most people wont even look your way.

Now these bars are really just you garden variety bar that you find all over Hong Kong but with the added flavor of some mics and mostly all Cantonese and some Mandarin songs.  You may find some older Top 40 cuts in English at some places don’t expect it at every place you go.

Now that we’ve gotten that out of the way, there is another type of Karaoke bar that is more geared towards male customers.  These would also fall into the category of a Karaoke bar but when walking up to the place the signage will let you know which type of place it is.

These Karaoke bars have lots of room as mostly you go there with friends and it’s more of a bar hangout type of night with one exception.  You have a girl sitting next to you to chat with, pour your drinks, sing your favorite songs and get you to play more drinking games in order to run that bill up.  These girls are called ‘boxing girls’ due to their high skill level in playing the drinking games.  They are essentially professional drinkers and drinking game players.

Now I know what your thinking.  You’re thinking that these women are prostitutes.  Well they’re not……….well not all of them.  For additional services, inquire within. 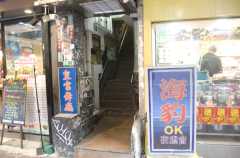 As for the female version of this, there are some spots that are very similar in nature but have Thai guys as the ‘boxing girl’ equivalent.  Most of the customers are a bit on the older end, but hey, people got to get their groove on the way they get their groove on.

All along the northern part of the famous Temple Street Nigh Market, there are senior citizen karaoke bars that not only are all of the patrons of the advanced age, so are the women that sing the songs, as are the band members for the few spots that have live bands.

So the way these spots work is that it’s an open bar room where older men sit and drink some brew or even just sip on tea and watch some older women (well they are probably younger than the men) sing the songs that they like to listen to.  The women get ‘tips’ to sing and the usual amount is about HKD20 dollars (about USD$2.50) but some give more when the notes are right.  Often the beer or liquor is bought at 7-11 and brought in and it’s the women that sing that also make the beer run.  Most places stay pretty well packed at times and the idea of it is genius.  These older men still have a bit of fun like when they were younger and I’m sure it feels good for them to have some part-time female companionship.

Temple Street as well as has a very well established outdoor karaoke area that you can visit but I’ll save that and those pics for when it opens again after the COVID-19 lock down ends.