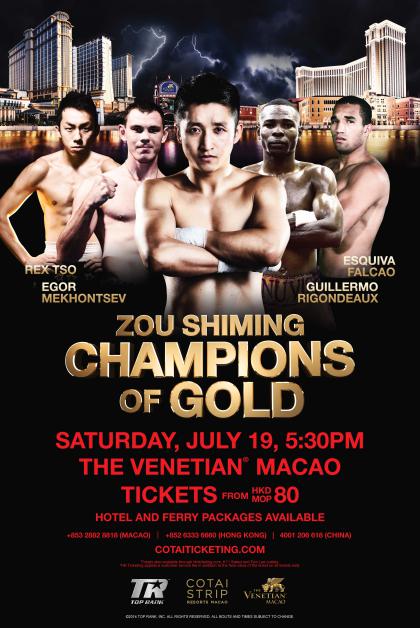 Let’s go to Macau to watch the fights.  I love being able to hear this sentence.  To finally be able to watch some good professional boxing so close to home is a good feeling.

I grew up a boxing fan and even did some amateur boxing at Finley’s Gym in N.E. Washington D.C..  So to be able to go to a good fight night in Macau brings a special nostalgic feeling to me and is starting to find its place in Hong Kong sporting culture.

This is where the stage has been set and has already brought five fight nights to the city.  One of them being a major……let me say that again.  A MAJOR fight card with Manny Pacquiao and Brandon Rios as the headlining fighters.  I was even fortunate to have ran into Manny the day before the fight and got a pic with him. Not a selfie!  But the Venetian has a wonderful venue.  Pretty much anywhere you sit in the arena, you can see the ring.  If you want a more zoomed in view, you can look at the multiple massive sized screens for a detailed look or at times when they are fighting against the ropes or in corners.  Also, there is a way to get free food and drinks all night long while sitting in your seat, but I’m not going to tell you how.   Unless maybe if you leave a comment.

Bob Arum has promoted all of these fights and who else would be a better man for the job than him?  Michael Buffer was even the announcer for the Pacman fight.  Leeeeeett’s get ready to ruuuuuuummmmmbbbbllllle.  You know who I’m talking about.  Bob Arum is really trying to break into the China market with some Chinese boxers starting to lace up the gloves and get their careers going in the art of the sweet science, such as Zou Shiming.  Arum says that he plans to put on a fight in Macau four times a year, according to an interview he did with ESPN.  Hong Kong has a fighter Rex Tso Sing Yu, who is possibly going to be a world champion in his respective weight class.  Macau has a fighter as well that is coming through the ranks named Ng Kuok Kun.

China in the house.

With all of the Chinese gamblers in the largest casino in the world, if there is a Chinese national fighter fighting in the arena, they will watch and support.  As many of the punters on the gaming floor are so heavily cashed up, many will buy floor tickets and just stay to watch the Chinese fighters and then the casino floor starts beckoning them to return.  Leaving large portions of the floor seating area bare.  Although this seems to be their M.O., you can see a steady increase in supporters in the crowd for Rex ‘The Wonder Kid’ Tso and Ng Kuok Kun ‘The Macau Kid’ and that is impressive and fun to be apart of.

What is the future of boxing in Macau?

With Bob Arum saying that he will have a fight per quarter, I think that Macau has a real chance to build on the early success in the fight promoting business.  I think that a big determining factor would be the crop of Chinese fighters from China, Macau and Hong Kong.  If some good fighters can be trained to a level that is expected on the international stage, then Macau has a bright future.  Also, I feel that some of those fighters will need to be in some of the heavier weight classes.  Lighter weight classes don’t have a large appeal with all markets.  These fighters will have to be able to compete against good fighters from around the world and not just fighters from around Asia as well.  Let’s see if Macau can build a bit of a local fighting culture similar to Vegas where fighters come there to be trained and fight against other fighters regularly.  It has a long way to go but all is possible when you’re playing with casino money.

In conclusion, there is much to do in terms of creating a real boxing culture in Macau/Hong Kong/China but Bob Arum and the Venetian are really doing their part and getting the ball moving in the right direction. Champions of Gold will be going down on July 19th and if you haven’t bought your tickets and booked flights or ferry tickets, do so quickly as I’m sure there aren’t very many seats available by now.  If you are a Sands and Cotai Ring Club member you can get 50% discount.  Don’t forget that I know of a way to get free drinks and food all night long but it’s a secret.  I can’t tell everyone.

Last but not least.  Keeps your hands up at all times and break when I say break.  Touch gloves and let’s have a good clean fight.  Let’s get it on!